The first Sunday of the season finds itself with a lot to live up to already as yesterday served up no less than 7 goals from the 3 matches played including two last minute goals and a penalty. Not bad entertainment for the first day. With the matches on show, especially in Suwon and Ulsan, we could be in for a treat again today. Below is a preview of the 3 games to be played.

Jeonnam have managed to get through the close season without really making the news too much, with the biggest news probably being Rob Cornthwaite being released. Jeonnam started last season far above expectations and although a repeat this season is unlikely they will be hoping to avoid a repeat of the capitulation of the second half of last season. Jeju had a reasonable season last year finishing 5th in the league but they were up there challenging for an ACL place up until the last few weeks. Jeju are kind of like the UK ex-snooker player John Parrot, kind of bland and boring but are more than capable of the upsetting the apple cart from time to time. The return of Kang Soo Il from Pohang could be a real boost for them. 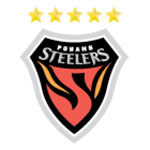 For an opening weekend of the season they don’t come much bigger than this. Both teams have got to be considered Jeonbuk’s main challengers for the title and so to have them come up against each other so soon should make for a fantastic clash. Suwon go into this one on the back of a fantastic victory over Urawa followed by a disappointing defeat in Beijing. They have bolstered their squad with the addition of ex-Jeonbuk Kaio and Leo signed from Sion, added to the fact they kept Santos and Jong Tae Se and they have a potentially lethal attack. Pohang have been one of the busiest teams of the close season and after 2 seasons of having no foreigners were quick to fill-up their compliment. They have Andre Moritz in their squad and he does come with a reputation though we all know that counts for as much as your ajossi co-worker telling you the fourth bottle of Soju is good for your health. I was at the corresponding fixture last year and it finished 4-2 to Suwon, I wouldn’t expect a repeat but I would expect goals.

A match which last season might not have been the most glamorous has some added flair this season caused mostly by the close season transfer activity. Ulsan undoubtedly strengthened their squad by adding the Seongnam duo of Server Djeparov and Kim Tae Hwan, who both tasted success last time out against Seoul in the FA Cup final. Retaining the services of Kim Shin Wook is also huge for Ulsan and who knows if they have a good start to the season they might keep him for the whole season. Seoul on the other hand has been more active in terms of departing players with Escudero joining Kim Ju Young in the Chinese Super League. They have been boosted by the return from police service of Jung Jo Gook who netted two against Hanoi in the recent 7-0 ACL playoff victory. This match has a habit of throwing up some pretty good games and hopefully this one probably won’t be any different.