SUWON FC WIN 1-0 DESPITE SCORING A CONTROVERSIAL OWN GOAL.

After observing K-league football from afar for a number of years and only attending a few random games each season, I took the plunge this close season and committed to Suwon FC.

My decision was admittedly the result of my youngest son (10) joining their U-12 youth system around October last year.  At the time of signing up there were only a few rounds of the season left.  Nonetheless, we ventured along to a couple of meaningless (for Suwon FC) home matches to show our commitment.  We watched a 1-0 loss to Busan and a 4-0 win over Anyang.  Suwon’s disappointing first season back in the Challenge, as it then was, was reflected in the poor attendances but watching from the temporary stand, I couldn’t help but be impressed by the passion shown by the small group of “ultras” gathered a little to my right, the Suwon FC Supporters Real Crew.  Like many fan groups across the country, they banged their drum and sang their hearts out knowing full well another season in the second flight of Korean football had been confirmed weeks before. 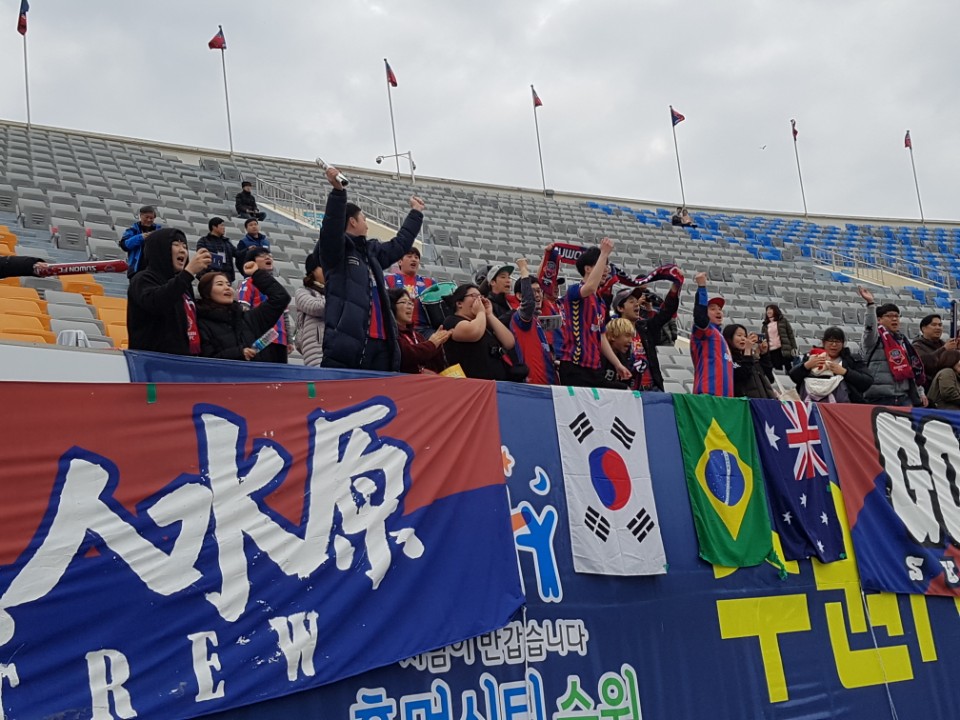 The passionate ‘Real Crew’ saluting the players at the end.

Anyway, enough reminiscing; the Kilt had been dropping hints about me writing an article or two for the site, so with my newly acquired season ticket safely hanging from my neck, I entered 수원종합운동장 alongside the man himself on Sunday with the unspoken idea of taking in the match then wowing you fine readers with my insightful tactical analysis of Suwon FC v Seoul E-land.  However it was to be off-field matters which would make the headlines.

After finding a couple of seats in the temporary stand, we noticed that the Real Crew were not in their usual place, centre of the temporary stand behind the goals.  That spot was taken by a group of Suwon FC-clad ajummas, some of whom were holding drums, led by an old boy in his 60 or 70s wielding an impressive set of cymbals.  The Real Crew were to be found in the E stand near one of the corner flags.  The set up seemed strange and throughout the match it was still the Real Crew who generated what noise there was whereas the ajummas and their esteemed leader seemed to spend a lot of the match on toilet/cigarette breaks.

In truth though, I didn’t think too much more about it until later that day.  Scrolling through instagram, I came across a screenshot of a lengthy statement from a Suwon FC fan I follow.  It was a statement posted by the Suwon FC Supporters Real Crew on their facebook page (which I was oblivious to until this point).  My rudimentary Korean skills and a bit of google translating made it clear the Real Crew were not happy with the events at the stadium earlier in the day.

The statement can be read in full on the facebook page but may be summarized (with some liberties taken by me) as follows.  The Real Crew, regarded as the main supporter group since 2013, only found out upon entering the stadium on Sunday that their usual place in the temporary stand had been allocated to the Suwon FC Cheerleaders (the aforementioned ajummas that the Kilt informs me used to frequent a section of the W stand) and they would have to go elsewhere.  The Real Crew then go on to express anger at the lack of communication and being treated so shabbily despite supporting the club since its formation in 2003.  They state that they will continue to support the team but will not “cooperate” with the Cheerleaders who they feel don’t share their values and commitment.  They say Suwon FC risks its status as one of the better Citizen clubs through such unilateral actions and predict clubs acting in such a way will harm Korean football. They finish by demanding action against the person who made the “unilateral decision”, seeking a promise that it won’t occur again and that lines of communication are improved between the club and the group.

As mentioned at the start, I’ve been very much a casual observer of the beautiful game in Korea so I’m not going to attempt to lecture you long-term committed fans on how fans should be treated but my tuppenceworth is that clubs in Korea, especially the smaller ones, need to do everything they can to hold onto and attract fans, especially those who create the atmosphere and follow the team home and away.  The key issue – an all too common one in Korea – seems to be the lack of (effective) communication.  Hopefully the knock-on effects are negligible.

Being the opening day of the season, the temporary stand was full of kids on Sunday.  There was more likelihood of kids (future fans) being excited, maybe even inspired, by the passion of the Real Crew than the “ajummas on valium” atmosphere created by the Cheerleaders.  The decision didn’t create a better atmosphere and only served to upset the club’s most loyal followers.  From that perspective, it feels like an own goal from the club. It should be noted that after fulfilling their photo duties with local government officials, the players made their way over to the Real Crew and celebrated with them. 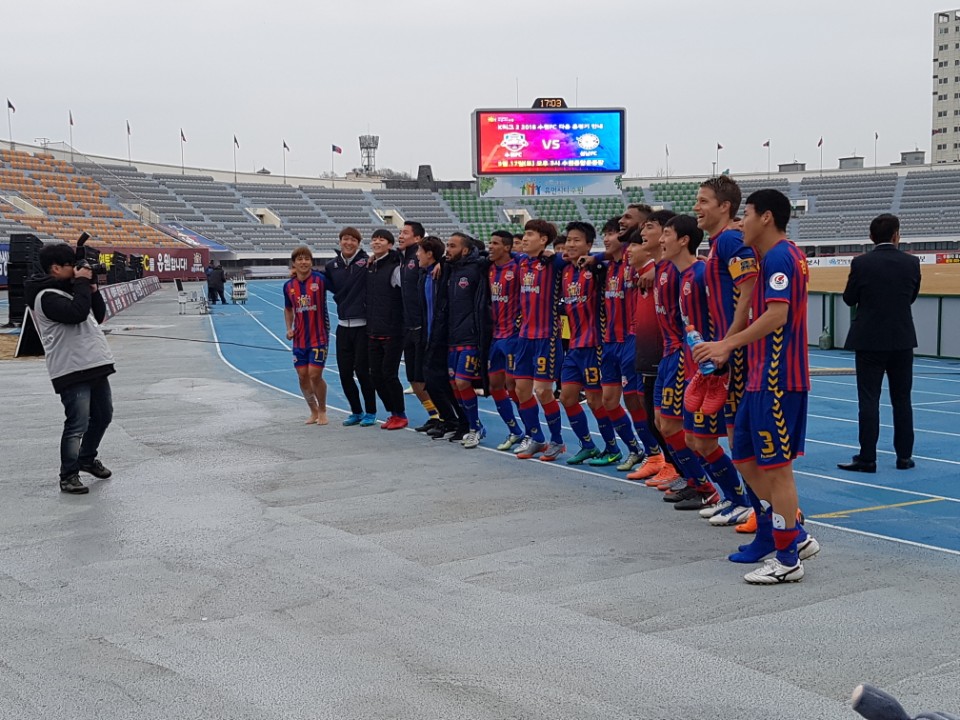 The players salute their “12th man”

I really hope the issue is resolved before the next home match against the Kilt’s Seongnam on March 17th.  On a side note, that game may well have fewer people in the temporary stand.  Depending on results this coming weekend, the Suwon U-12 squad may have a cup match in Icheon that afternoon and many of the kids and parents (all of whom bought season tickets) there on Sunday will not be able to attend.  It will be typical of me to commit to a team only to find myself cup-tied most weeks!

Oh yes, that insightful tactical analysis (abridged version).  Suwon FC made heavy weather of beating E-land.  In fact, E-land may well feel slightly aggrieved not to have picked up a point having had slightly more possession (54%) and managing 8 shots on target.   Suwon, to be fair, managed 14 on target but squandered all bar one.  Suwon’s Baek Sung-dong also took the worst penalty (after VAR intervened) I’ve ever seen live in a stadium – very much NOT ON TARGET!  (*these stats, for what they’re worth, came from the Suwon FC facebook page which also gave goalscorer Kim Dong-chang the man of the match award despite doing very little other than score one of numerous chances, so……)  In fairness to Kim, scoring the only goal of a match which had 22 shots on target may be worth the award.  He was substituted late on and hobbled around afterwards with an ice pack on his calf.

Suwon forward Matheus Alves is a big unit and will be exciting to watch but may find himself under scrutiny from referees as he battles central defenders.  I believe Alves and both of E-land’s central defenders picked up bookings following numerous aerial duels.  Suwon looked threatening, especially after the more direct Bruno came on, but their final pass or shot was dismal at times.  They will score goals but they seemed a bit unbalanced with too many attack-minded players who didn’t seem at all enthusiastic about the defensive side of the game.  The defence, marshalled by Adrian Leijer, (captain in the 2nd half after Lee Seung Hyun’s substitution) was left exposed more than a few times.  How manager Kim Dae Eui deals with that balancing act will go a long way to deciding if Suwon really can challenge for automatic promotion.  No doubt lessons will be learned and three points was the sole objective of the season opener but a better performance will be required on Saturday as Suwon FC head to Asan.