After what feels like an eternity for most fans of the beautiful game it’s finally time for the 2016 K-League Classic season to get under way this weekend and what a way to start as we have more than a couple of tasty fixtures including Suwon FC’s debut, a Seongnam v Suwon Bluewings clash and a hotly anticipated meeting of the two teams many are tipping to fight it out for the title in Jeonbuk and Seoul.

Seongnam kick off the 2016 season with the visit of last years runners-up Suwon Bluewings in a fixture which is often the first date Seongnam fans check for when the season’s fixtures are revealed. In truth of late Seongnam fans have had more luck against Suwon down at the Big Bird than at home and last year were comprehensively beaten 3-1 in the same fixture. They did however go unbeaten in the next three meetings between the teams and recorded a well-deserved 1-0 away victory when Nam Jun Jae was the hero of the day.  Seongnam will once again look to the goals of Hwang Uijo and the leadership of Kim Do Heon as they aim to go one step further than last year’s fifth place and try and clinch an ACL spot this season. Suwon Bluewings have a couple of games under their belt already this year having played two matches in the ACL although have looked far from impressive. Regarded by many as being somewhat fortuitous to have finished runners-up to a rampant Jeonbuk last year they will have to prove more than just the doubters wrong this season if they are to finish in such a lofty position come December. 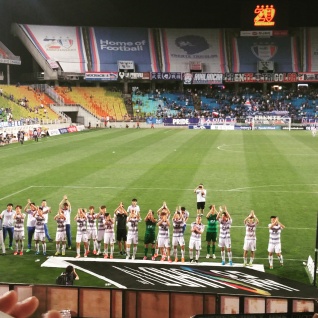 I guess you could call this the Korean Charity Shield as Champions Jeonbuk welcome FA Cup holders Seoul to the World Cup Stadium in Jeonju for what is probably every neutral’s match of the round. Much has been made of both team’s transfer wheeling and dealing this close season with names such as Kim Bo Kyung and Dejan on most people’s lips. On paper it certainly looks like these will be the two teams to battle it out for the title and only the most loyal (or bigoted) fan would wager on their team toppling either club. Both teams are also in this year’s ACL and it has to be said that Seoul have blown everyone away with their performances and especially that of Adriano who has managed to push Dejan into the shadows with a quite incredible 7 goals in 2 games. Jeonbuk lost out in China to big spenders Jiangsu in their second round match and definitely looked vulnerable at the back, although much like Seoul they do look devastating coming forward . Seoul are famous slow starters in the league whereas Jeonbuk raced away with it last year and realistically had it wrapped it before the end of summer. It’s only the first round but all eyes will be on this to see if Seoul will be a credible challenge or not.

The final match on Saturday sees last year’s third placed Pohang take on the surprise package of 2015 in Gwangju. Many predicted that the newly promoted boys would be the proverbial cannon-fodder for the established Classic clubs but they kept their head above water and finished tenth. This year they are probably near the top of most people’s tips for the drop but as last year showed football is indeed a funny old game.  Pohang were a bit of a mixed bag last season and seemed to excite and frustrate their fans in equal measure. They lost some hugely influential figures during the close season both on and off the pitch as both Kim Seung Dae and Ko Mu Yeol left for pastures new and manager Hwang Sun Hong also cut ties with the club after five years at the helm. In fairness the upheaval doesn’t seem to have knocked them for six and after two ACL matches they sit pretty at the top of the table having drawn with Guangzhou Evergrande in China and defeated Urawa Reds in The Steelyard.