And so began the predictable fallout from Monday night’s Korean national team defeat to Sweden with some comments scoring rather high on the outrageous scale! We had everything from IKEA being targeted to suggesting widespread changes in the domestic game and some even questioning Korean fan culture. It’s safe to say this isn’t my first rodeo and having watched Korea from close quarters in the last 3 World Cups I’m more inclined to have less of a knee-jerk reaction. And so without any further ado it’s time to rack over the coals of the opening group game and look at the key areas of the coach, the tactics, the fans and the future….

First up it’s the man in the dugout and the most likely recipient of a p45 come July! 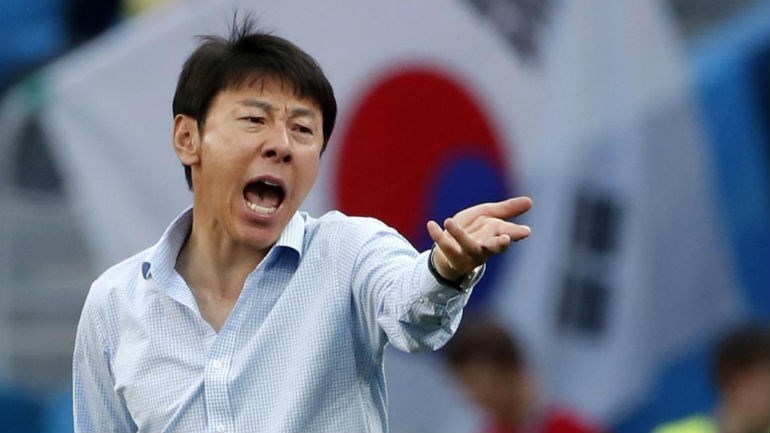 For many a ‘newbie’ follower of the Korean National Team Shin Tae-yong seemed like both the easy choice and the unimaginative one when he was confirmed as the National team manager in the wake of the Uli firing/resignation. To others tho he was the inspirational leader who as a player won every honor possible with Seongnam FC and who as manager led them to their 2nd Asian Champions League crown. There is little doubt he was a safer option than his predecessor who never looked comfortable in a KFA shirt and given his experience with the u23 team it could be argued that the thought process was that he might at least inject some fresh blood into the squad if not fresh ideas.

In the lead-up to the game Shin became embroiled in some “controversy” as he explained away the team’s poor form in their pre-tournament friendlies by claiming that he had swapped player numbers and positions in order to confuse Swedish scouts who, according to Shin, wouldn’t be able to tell Asian players apart. One would imagine that come the final whistle last night the Swedes might have been even more confused such was the disappearance and almost anonymity of many of their opponents during the match

Shin’s claims of “mind games” and “tricks” had, in fairness, piqued interest in just exactly what devious plans the mastermind had up his sleeve for his unsuspecting Swedish other half. In truth tho much of Korea’s problems of late have been the predictability of their team selection and tactics as they really do seem limited somewhat in both depth and adaptability. The two areas that Shin could realistically tweak were up front and in goals….he got one correct and one wrong!

So what did he get right I hear you ask, well the decision to start Daegu’s Cho Hyun-woo in goals was a move that caught many off guard. The man who, allegedly, gets called ‘Daegea’ (here Michael Welch of The Tavern tells you why) has been a recent call-up to the national team and with only a handful of caps to his name before Sweden was a surprise selection ahead of the far more experienced Kim Seung-gyu. But with one raise of his right knee midway through the 1st half the relatively young keeper earned his moniker as he pulled off a simply fantastic point blank range save and then punched the rebound to safety. He had no real chance at the penalty and if it wasn’t for his heroics before and after the decisive spot-kick the scoreline could have, and should have, been much much worse.

If Shin got that call correct then he surely got the dilemma of who would partner Son Heung-min in the team as the main goal threat completely wrong. He had options but in the end he went with the towering shape of Kim Shin-wook. In The Wookie’s defence he has been performing well of late in his country’s colours and had more than deserved his selection in the final squad that boarded the plane to Russia…but a starting spot against the physical presence of the Swedish defence? That was a different question altogether. If the tactic was for him to win high balls and knock them into Son’s path it didn’t work, if the tactic was to use his height to cause panic in the opposition box it didn’t work. In the end he cut a frustrated figure up front and it came as no surprise when he was hooked in the 66th minute in a swap for Jung Woo-young as the Swedish were celebrating their goal. How long play raged on before the substitution was even noticed is a question I asked myself.

There would be no goal celebration for The Wookie in Nizhny

Sweden didn’t make it to Russia at the expense of Italy by being quicker or more skillful than their more illustrious opponents and perhaps if Shin had spent less time playing “tricks” and more time watching videos of the other Group F teams he would have realised this. 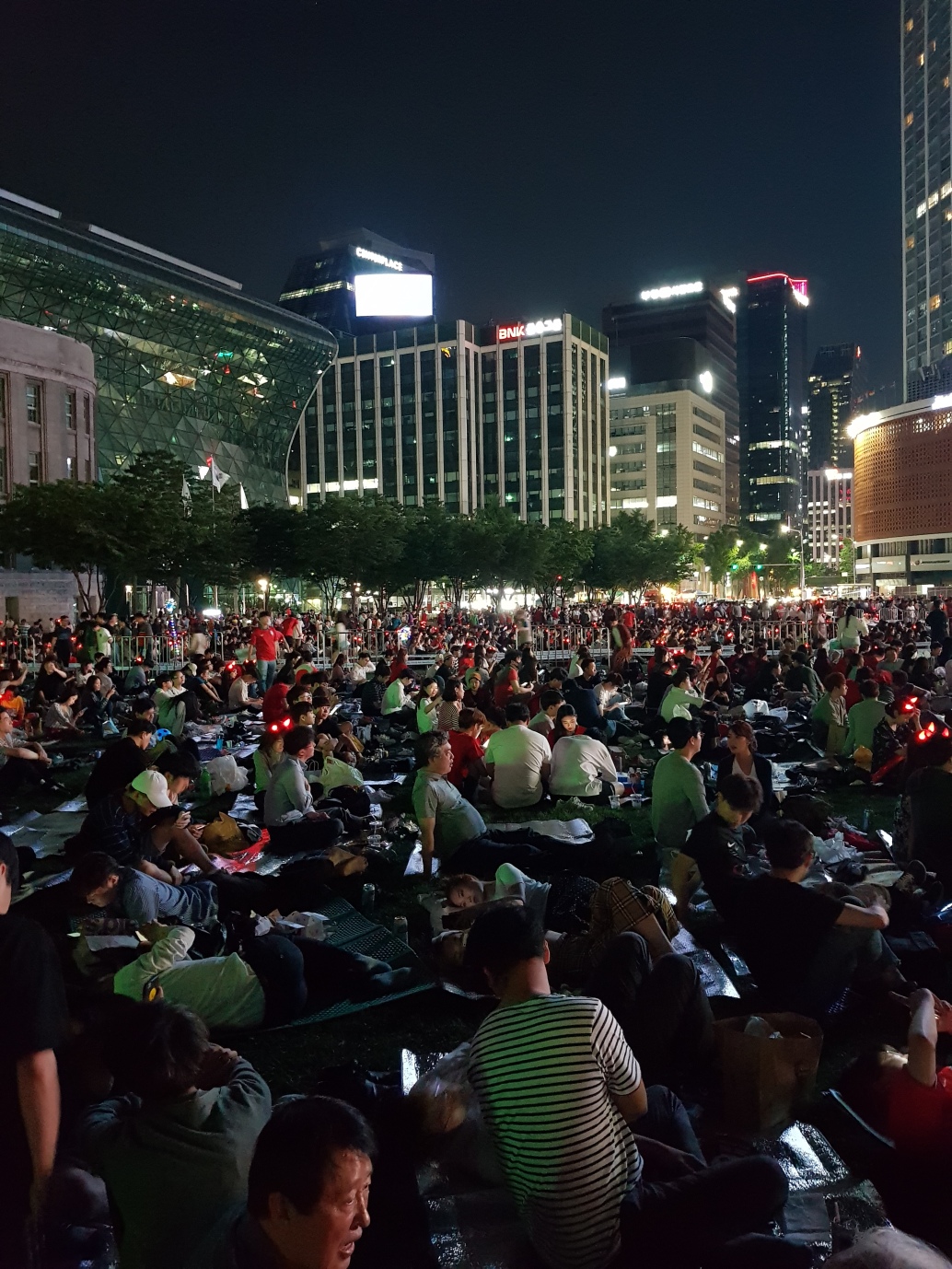 City Hall for the Sweden match 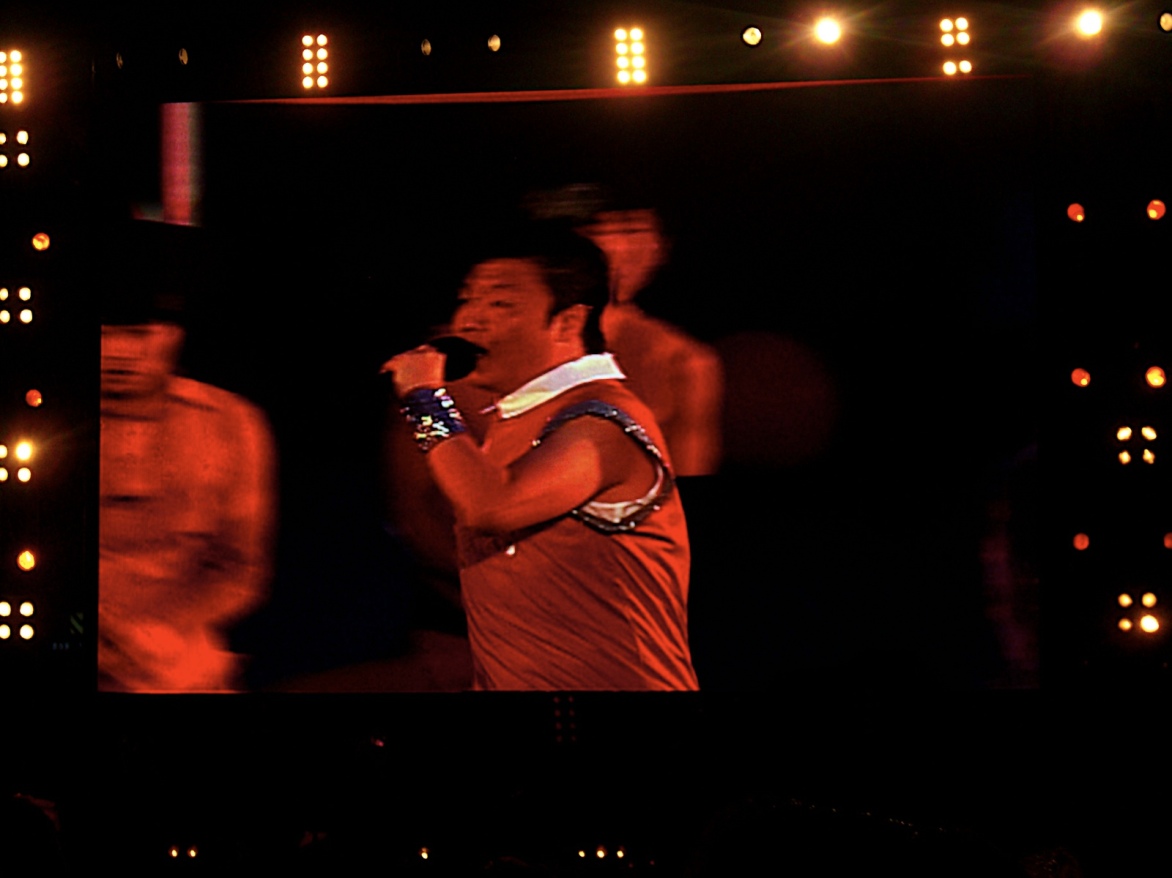 Psy gets us charged up for Greece in 2010

As mentioned above this is now my third World Cup in Korea with 2010 being in Banpo Park as Korea humbled Greece and 2014 in Gwanghwamun as a huge and expectant crowd was sent packing at half-time by Algeria. And so it was as I settled down in City Hall on Monday night it quickly became obvious that despite the large numbers the confidence and optimism of 2010 and 2014 was noticeably lacking. The carnival atmosphere of Banpo and the patriotism of Gwanghwamun had been swapped for a more subdued and almost forced series of “Tae Han Min Gook” chants that barely reverberated around our blanketed area never mind the concrete mountains of City Hall Square. And so it was when Andreas Granqvist swept away Korean dreams in the 65th minute that the fans merely shrugged their shoulders, sipped their Cass and slumped back into their silver mats and accepted what was to come. As the final whistle sounded the red-horned droves picked up their mats and trash bags and made their way towards the subway entrances with dreams of what may have been had Hwang Hee-chan been able to guide his last minute header goalwards.

The fans getting ready for Algeria in 2014

The build up to kick off against Sweden

So the question, I guess, is where now for Korea? In the short term they need to dust themselves down and throw everything at their next match against Mexico on Saturday night. This match was always going to be a pivotal match for The Taegeuk Warriors so not much has changed in that respect. You have to imagine that Germany will not lose two on the bounce in the group which leaves the Red Devils with a  ‘must win’ over Mexico and then the hope of a minor miracle against the World Champions in the final group game. Is it possible? Unlikely! Will Korea probably be home before most teams have even broken sweat? Almost certainly. But without the despair of defeat the euphoria of the unexpected victory is lost. And so it is that I will be taking my place at City Hall square on Saturday night with a beer in my hand and the hope that this version of the ‘Korean wave’ has just a little longer left to go.