After another productive Hwang Ui-jo inspired international break it’s time to return to the bread and butter of the domestic scene and the penultimate round of the K-League One. Before the break FC Seoul put themselves to within touching distance of safety with a ’12th man’ assisted victory over Jeonnam Dragons, while Incheon came back from Gangwon with all 3pts and the Army played out a rather tepid 0–0 draw with Daegu. Those results mean that we could have an epic final day of drama ahead…but we could equally see everything wrapped up this weekend too. 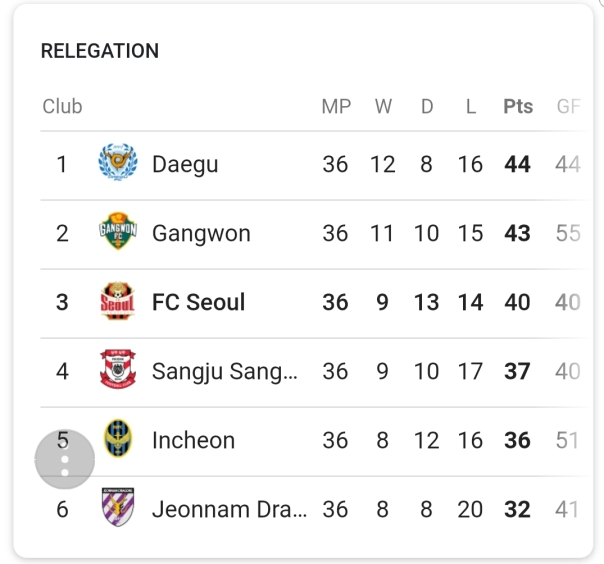 The Relegation Group table going into the penultimate round 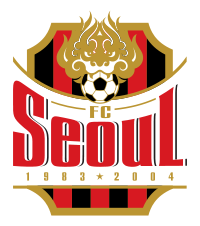 Choi Yong-soo finally got a win under his belt and in the process halted Seoul’s abysmal winless run of twelve games stretching all the way back to August. The victory over Jeonnam wasn’t without controversy and came courtesy of two penalties with the 2nd coming in the 94th minute after Park Chu-young was adjudged to have been fouled. It was an end-to-end tussle against the bottom-placed side with both teams seemingly being jolted into life by the prospect of a season or more in the K-League Two. Those hugely valuable 3pts leave Seoul in something of pole position going into the weekend, safe in the knowledge that a draw at home to Incheon will be enough to secure top table status and allow Choi to go about repairing and rebuilding the disaster left by Hwang Sun-hong. A defeat, or course, would leave them heading to Sangju with one eye elsewhere. Next up is Incheon United at home 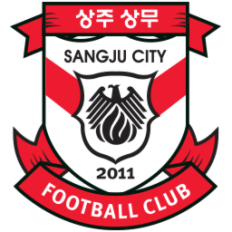 Last time out the Army team came back from Daegu with a share of the points after a goalless draw in a game which saw the hosts reduced to 10 men for the last ten minutes or so. That draw has thrown them right into the relegation fight with battle-hardened Incheon as they sit only a solitary point above the playoffs. Yoon Bit-garam was unable to make it three games in a row with a goal but he will continue to be pivotal for them going forward if they are to make it four years in a row in the K-League One. They, like FC Seoul, have only scored 40 goals all season but given that fact that the match against Daegu was the first time since August that they failed to get on the scoresheet it does highlight what a poor start they had to the year, and might just give them hope that they can outscore their remaining two opponents….one of which is Seoul.  Next up is Gangwon at home

Incheon followed up their win against the Army with another 3pts in a hard-fought match down in Gangwon. They raced into a two goal lead in that clash before looking like they had thrown it all way only to retake the lead in the last minute courtesy of a tear-inducing last minute winner from Lee Jeong-bin. The aftermatch interview showed you the emotion that is coursing through the Incheon team and a lot of that has to be down to the leadership of Jorn Andersen who has turned them into one of the most exciting teams to watch at the moment. They’ll be boosted by the return to goal-scoring form of Stefan Mugosa who has netted in the last two outings. They still look incredibly frail at the back but giving their penchant for attacking at every opportunity you do get the feeling they won’t go down without a fight. Their final match is at home, will we have a repeat of the scenes from 2016?  Next up is Seoul away

Ah Jeonnam what more can we say that hasn’t already been written, blogged and, for many a Dragons fan, cursed! After two rather meek defeats to Sangju and Gangwon they finally turned up against Seoul only for Wanderson, in particular, to spurn a multitude of chances and then lose with the last kick of the ball. Perhaps if they had taken to the field in previous weeks with the same fire in their belly they wouldn’t be odds-on favourites for automatic relegation. They sit 4pts adrift of Incheon and 5pts off Sangju with a loser-loses-all clash against the former on the final day weekend. If they are to stay up it’s going to take two huge performances for every player with POSCO emblazoned on their chest starting with the visit of their FA Cup conquerors  at the weekend.   Next up is Daegu at home