It was the moment Seongnam fans had been waiting over two years for as the 2019 K-League One fixtures were announced. Suddenly that cold November back in 2016 when the unthinkable happened had finally been exorcised, Seongnam were back at the top table. It’s been a long journey from Jamsil to the Godeok and everywhere in between but come 2pm on March 1st the highs and the lows since relegation will be consigned to memory.

Seongnam will begin their 2019 season with a trip down to Changwon to face 2018’s K1 runners-up Gyeongnam before a home double header against FC Seoul and then the game everyone has missed most as Suwon Bluewings come to town. Other notable dates on every Seongnam fan’s calendar will of course be April 27th and a trip to Incheon Football Stadium, May 4th as Jeonbuk arrive and undoubtedly July 21st and the first visit to The Big Bird in almost 3yrs.

Due to some maintenance/upgrading of Tancheon, Soengnam will be playing their home matches at their old Seongnam Sports Complex stomping ground near Moran with Tancheon re-opening in July. Moran was the home for some of Seongnam’s finest moments and despite Tancheon having the nickname of “Fortress Tancheon” few fans will be unhappy about having the chance to return there and hopefully see it continue it’s run of good luck. 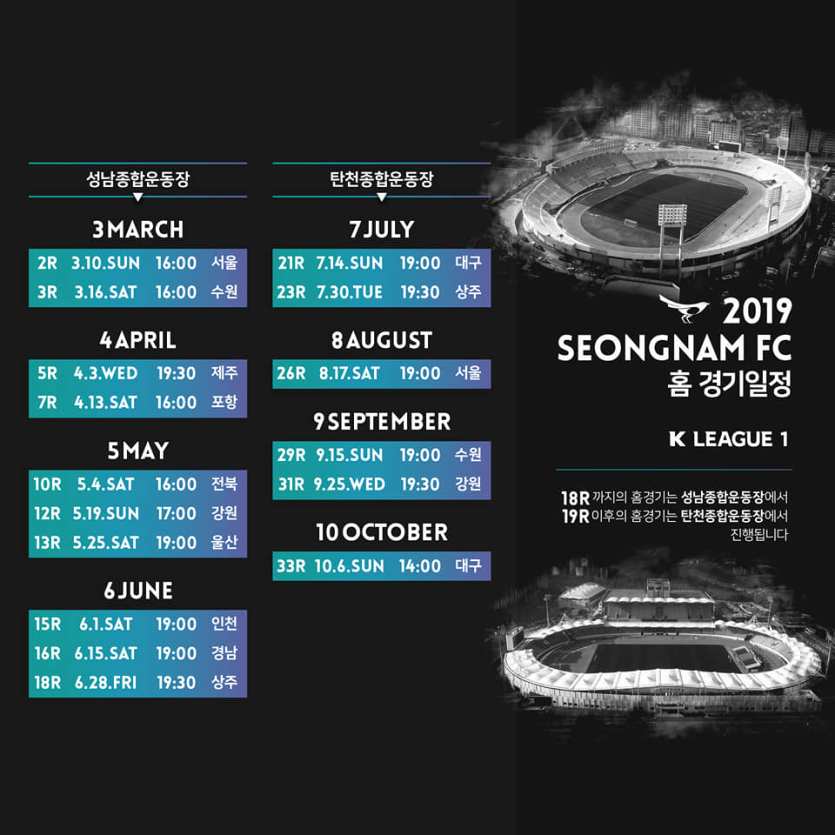 The home fixture list split between Moran and Tancheon.