There was no doubt where the surprise of the round was last weekend as Seongnam FC handed Ulsan their first league defeat of the season as they stunned most with a 1-0 win down in the Ulsan Munsu Stadium. It was a defeat that allowed Jeonbuk to stay top after their striaghtforward victory over Sangju, Seoul’s huffing and puffing against Incheon on Sunday resulted in a 0-0 bore draw and meant that after 8 games it’s the familiar name of Jeonbuk sitting pretty at the top of the table. 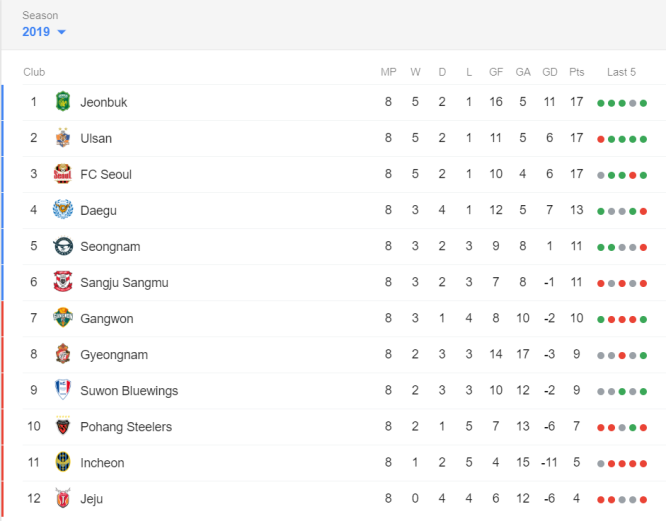 The K1 table going into the weekend

We have the 2nd installment of Friday night football this weekend and a Super Sunday as 1st, 2nd and 3rd all play.

This week seen a bit of a manager roller coaster as Jorn Andersen was joined on the managerial scrapheap by Pohang’s Choi Soon-ho and it’s his former club that is in action on Friday as Suwon Bluewings travel to Pohang for the second part of their double-header having met in the FA Cup only last midweek with Bluewings emerging victorious of that occasion.

Pohang moved quickly to announce the appointment of coach, and club legend, Kim Ki-dong as their new manager and will be hoping the new man has an instant impact on a team that has looked disinterested the last couple of games. They got absolutely taken apart by Daegu last weekend, 3-0 down after half an hour and once again were opened up easier than a Friday night Soju. After their cup win, Bluewings traveled to Gyeongnam and played in one of two 6-goal thrillers last weekend as they twice surrendered leads to finally draw 3-3. Adam Taggart bagged another goal for his new club and is beginning to look more A-League Taggart than SPL.

First up on Saturday we have winless and managerless Jeju United hosting Sangju and given that neither team has managed to win in their last five games (at least) you get the feeling this one isn’t exactly going to break any attendance records. Jeju lost 4-2 at home to Gangwon last time out and must fall asleep every night smiling at just how poor Incheon and Pohang have also started their seasons else they’d be favourites for the drop. Despite their lowly position they have only failed to find the net in 3 games so far this year and with Aguilar and Magno Cruz in the squad they do pose a goal threat. Sangju, as mentioned above, lost to Jeonbuk last weekend and are in danger of falling out of the top 6 this weekend if they can’t stop the rot.

The posters are getting better even if the performances aren’t!

Gangwon built on their FA Cup win over Seoul by putting four past Jeju and have now scored seven goals in their last two games. They also seem to be banging goals in from everywhere with the slayer of Seoul, Deric, creating their first against Jeju before leaving the pitch injured. They face a Daegu team who saw their Asian Champions League hopes dashed on Tuesday night as they lost at home to Sanfreece. In the league though they have looked a tough nut to crack and sit 4th in the table on merit having lost only once in eight.

The final match on Saturday is one that most Seongnam fans would have been looking forward to when they earned promotion last year as they head to Incheon Football Stadium and one of the best away fixtures on the K1 calendar. They come into the game brimming with confidence having returned from Ulsan with a 1-0 win courtesy of Gong Min-hyun. If ever there was a game of two halves it was that match as Ulsan battered them in the 2nd half but just couldn’t find a way past Kim Dong-jun and his defence. It was a hugely unexpected result but also one that goes some way to confirming that The Magpies aren’t going to settle for just making up the numbers in their first year back in the top flight. Incheon on the other hand are fighting for every point even this early in the season and must have come away from Seoul last Sunday happy with a share of the points. Not that Seoul were good, on the contrary they were woeful, but that must have been a game that they thought they were certain to lose. They now need to build on that result and start putting points on the table especially given that you would feel Pohang and Jeju can’t continue to be so poor! 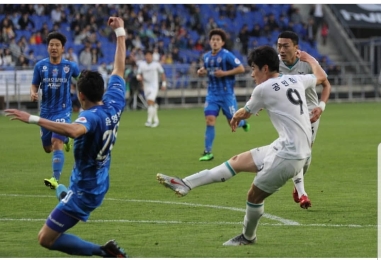 Sunday brings us two games that, on paper, should be absolute crackers as Jeonbuk host Seoul and Ulsan welcome Gyeongnam to town. First up is the Jeonbuk v Seoul match as 1st takes on 3rd at Jeonju World Cup Stadium. Jeonbuk haven’t had the best of starts but they are back in their rightful place atop the table after winning their last three games and look like they may have finally turned the corner. Striker Adriano is rumored to have been ruled out for the season with an injury but considering the size of the their squad and their ability to outspend everyone you imagine they’ll cope. Seoul failed to capitalize on Ulsan’s defeat to Seongnam when they drew with Incheon and you begin to get the feeling that the undoubted luck they were riding early in the season may just be running out. The only real bright light in that underwhelming clash with Incheon was Osmar making his first start in a Seoul shirt since his return from Japan, the Spaniard was head and shoulders above everyone else on the pitch that day and may need to drag those around him kicking and screaming into games. 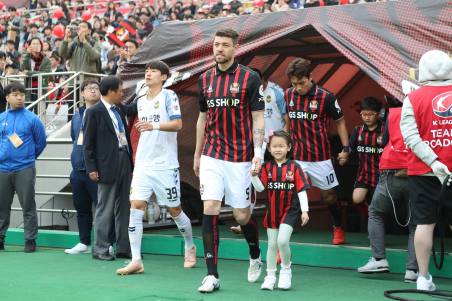 Osmar back in Seoul colours

The final match of the weekend is Ulsan v Gyeongnam as the hosts will be hoping to make the most of the result in Jeonju and either return to the summit or put some light between them and Seoul. They drew 2-2 with Kawasaki Frontale in the ACL midweek and were hugely unlucky not to take all 3pts. Gyeongnam were also in midweek action as they gave their ACL knockout stage hopes a boost by coming back from Japan 1-0 victors over Kashima Antlers. This match is a tough one to call, both teams look formidable in attack and rather fragile at the back and another 6 goal thriller is not impossible.

Below are full predictions for the weekend’s games…