With a full round of midweek K-League One fixtures behind us, some of which shall never be spoken about again, real gaps are beginning to appear in the league table as Jeonbuk,Ulsan and Seoul all slowly edge in front at the top while Seongnam, Gyeongnam, Jeju and Incheon are quickly being left behind at the foot of the table. There are some absolutely huge games coming up over the next month for those four teams at the bottom that could signal disaster for at least one of them while the top three have not exactly season-threatening fixtures lying in wait.

The K-League One table going into this weekend.

There are only two games on Saturday as Jeju host Ulsan in a, rather early for this time of year, 4pm kick-off while the game that most eyes will be on sees Seongnam hope to end a disastrous run of four defeats as they host bottom side Incheon.

Seongnam have not had their problems to seek of late as rumours of clashes between the board and manager have been rife and that’s before we even get to the rather rotund figure of Jaja and his hobby of eating everything Itaewon has to offer. Fans can generally push such irritations to the side but when they happen to coincide with such a depressing chain of results everything, naturally, becomes magnified. To say this match is huge for both teams is a massive understatement, defeat for the visitors would see Incheon trail 8th by a huge 7pts after only fifteen games, defeat for the hosts? Well that would complete an absolute collapse akin to 2016 for The Magpies and would surely bring Nam’s future to the fore.

A rather simplistic poster for Seongnam v Incheon

11th placed Jeju have the unenviable task of welcoming 2nd place Ulsan to the island after losing at home to Incheon midweek. Jeju jave lost three of their last five and every time you think they might have turned things around they go and shoot themselves in the foot again. The are still a team brimming with way too much individual quality to be sitting in such a precarious position. Their fans keep waiting for the light at the end of the tunnel, a torchlight procession against high-flying Ulsan is unlikely.

If Saturday’s fixture list was on the sparse then Sunday’s is as populated as Line 2 at 8am on a Monday morning. Jeonbuk will host the Army in the ‘Match of the Day’ and will be sporting their annual ‘Memorial Day’ kits in a fitting tribute to the country’s fallen heroes. They are, quite incredibly, the only club that does this and while they might not be every neutral’s “2nd team” it is something that deserves respect. Jeonbuk sit top again, capitalizing on Ulsan’s scoreless draw at home to Daegu, by coming from behind in Gangwon courtesy of a virtuoso performance from everyone’s favorite Cossack-dancing Moon Seon-Min. Sangju continued their unpredictable form by drawing at home to Gyeongnam after a Yoon Bitgaram penalty gave them the lead. Two wins, two defeats and that Gyeongnam draw make them the bookies least favourite K-League side and you really wouldn’t bet against them defying the Gods and getting a result in this one. 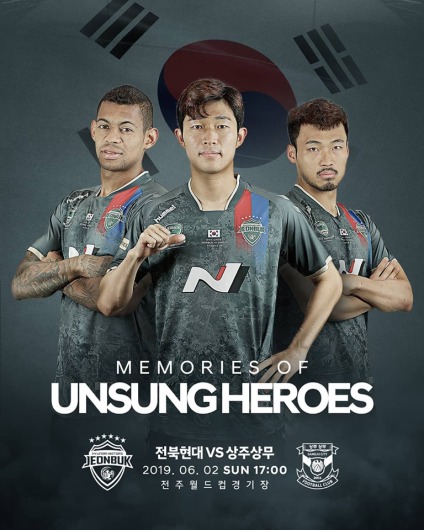 Gyeongnam host Seoul in the other 5pm kick-off looking for revenge for that early season defeat at Seoul World Cup Stadium where they opted to put the Asian Champions League before domestic fare and sent a fairly reserve team North on the KTX to the capital. They are, of course, out of the ACL now and look a shadow of the team that so optimistically took to the field against Seongnam away back in the opening weekend. Seoul, despite being ridiculously average, find themselves third and must feel as if all their Christmases and Birthdays have come at once. They come into the game on the back of a 3-1 victory over Seongnam which was more about Seongam’s 2nd half collapse than anything Seoul did. You get the feeling that at some point they will get knocked off the ‘lucky wave’ but quite when that will happen is anyone’s guess.

The remaining two matches see Pohang host Daegu and Bluewings host Gangwon in fixtures which, even at this early stage, look to be mid-table clashes. Daegu should, without doubt, be applauded for what they have achieved the last 18 months or so and they are fighting for that ‘best of the rest’ tag but they, unfortunately, look unable to challenge Seoul for an automatic ACL spot and could very well become embroiled in a battle for 4th with the likes of Pohang and Bluewings.

Predictions for all fixtures are below…